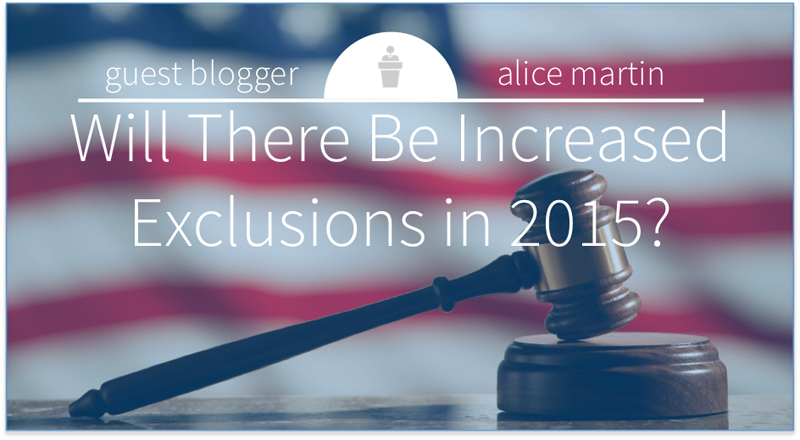 On October 23, 2014, the HHS-OIG issued new guidance related to “exclusions.” State Fraud Policy Transmittal No. 2014-2, was sent to the Medicaid Fraud Control Unit Directors, MFCUs, requesting the MFCUs and other prosecutors:

1. Avoid accepting “deferred prosecutions” designed to avoid the Federal exclusion law.
2. Report ALL convictions to the OIG for exclusion purposes – regardless of whether the MFCU believes that the underlying offense is “excludable.”

This replaces State Fraud Policy Transmittal 90-1, which was issued back on August 6, 1990

What does that mean for your organization?

First, it does not change that the “mandatory exclusions” are most significant for MFCUs involving individuals or entities convicted of program-related crimes, felony convictions related to health care or to controlled substances, and patient abuse. There are also “permissive” OIG exclusions which range from misdemeanor convictions for fraud, license revocation or suspension, down to an exclusion for failure to grant OIG or a MUFCU immediate access to records. MFCU performance standards require that all conviction information be reported to OIG exclusion staff. See Performance Standards for State Medicaid Fraud Control Units, 77 Fed. Reg. 32645, June 1, 2012. This information should be transmitted within 30 days of sentencing.

But as to Point 1, it means that the OIG wants to eliminate any existing confusion about its “conviction” reporting expectations for the MFCUs and other prosecutors.

Second, Transmittal 2014-2 reviews the meaning of “convicted” in light of the definition contained in section 1128(i) of the Social Security Act; as distinguished from an assortment of Federal, State, and local court practices which might influence a particular MCFUs “interpretation” of what a “conviction.” is.

Specifically, section 1128(i) defines “conviction” of a criminal offense to include:
1. When a judgment of conviction has been entered in a court – regardless of the pendency of an appeal or the right to appeal or whether the record has been expunged;
2. When there is a finding of guilt,
3. When a plea of guilty or nolo contendere is accepted by a court, or
4. When a first offender or deferred adjudication or other type arrangement is entered and a formal judgment of conviction is withheld.

Third, the OIG specifically notes the significant difference in a deferred prosecution and a deferred adjudication. In the latter, a guilty plea is entered but the court may delay a formal sentencing, i.e. Federal ‘pre-trial diversion.’ In that instance, ‘exclusion’ will go into effect against the offender. However, the OIG is greatly concerned with the use of deferred prosecution – where the offender does not enter into a plea and thus falls outside the definition of ‘conviction’ and is not ‘excluded’ from participation in the federal health care programs. The OIG asks that such agreements be avoided as exclusions remain a critical tool to protect the Medicare and Medicaid programs from “unscrupulous providers.”

To emphasize this position, the OIG exclusions database has now revised its instructions for MFCU statistical reports to clarify that a “deferred prosecution” cannot be treated as a conviction for statistical purposes. “If OIG cannot use the State’s action as a basis for exclusion, then the action will not be considered a conviction.” See, Transmittal 2014-2, at 3.

When government funding is tied to statistics this change is noteworthy!

Finally, as to Point 2 – the memo is clear – report everything and let the OIG make a determination of whether to exclude the individual or entity after considering all the circumstances in a particular case. In the past the MFCUs have been making this judgment call, and the OIG has clearly disagreed with some of the results.

Summary of the impact of Transmittal 2014-2 regarding Exclusions:

It will be interesting to see how this impacts the number of ‘exclusions’ as we head into 2015. For the defense bar it will make it much more difficult, if not impossible, to avoid the OIG reviewing your client’s actions for potential “exclusion” decisions. For now, it’s simply worth noting that the big dog OIG wants to take a bite out of crime by ensuring bad actors and entities are excluded…and you can see its teeth in this transmittal!