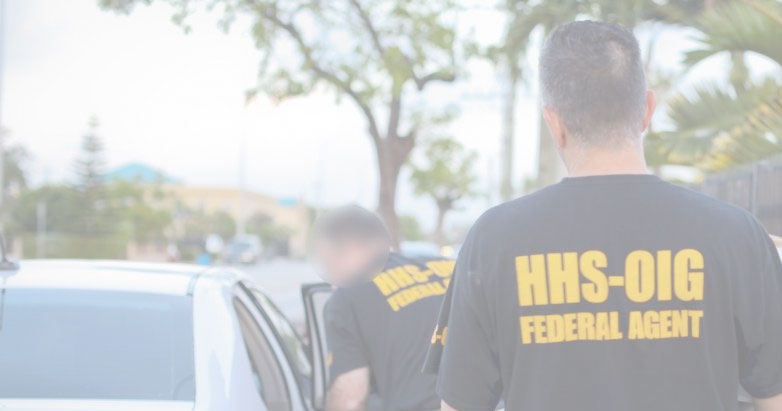 2018 is halfway over and the DOJ and HHS OIG have been very busy. Recently, the Department of Health and Human Services Office of Inspector General in conjunction with state and federal law enforcement agencies coordinated and the largest healthcare fraud case in U.S. history. In June, more than 600 defendants in 58 different federal districts were charged in participating in elaborate fraud schemes involving almost $2B in Medicaid and Medicare losses.

DOJ and HHS OIG Leverages the Power of Data Analytics

Also demonstrated by this large-scale collaboration is the power of data analytics and tools that are now utilized in sophisticated ways to find fraud and proactively try to stop future fraud and abuse.

The OIG is utilizing its authority to impose exclusions for these bad actors. In fact, from the takedown of 600 defendants, the OIG has already sent over 567 notices to doctors, nurses, and other providers based on the conduct related to opioid diversion and abuse.

Health care fraud is a betrayal of vulnerable patients, and often it is theft from the taxpayer. In many cases, doctors, nurses, and pharmacists take advantage of people suffering from drug addiction in order to line their pockets. These are despicable crimes. That’s why this Department of Justice has taken historic new steps to go after fraudsters, including hiring more prosecutors and leveraging the power of data analytics.

Today the Department of Justice is announcing the largest health care fraud enforcement action in American history.  This is the most fraud, the most defendants, and the most doctors ever charged in a single operation—and we have evidence that our ongoing work has stopped or prevented billions of dollars’ worth of fraud.”

Clearly, the OIG takes very seriously its statutory authority and responsibility to protect the integrity of federal healthcare program dollars and to preserve the funds that are allocated from taxes to pay for needed and qualified services. In fact, the report on the takedown showed that for every $1 spent on healthcare fraud and abuse investigations in the last three years has returned at least $4, totaling a large amount that is used to help increase care for Americans in need.

Every dollar recovered in this year’s operation represents not just a taxpayer’s hard-earned money—it’s a dollar that can go toward providing healthcare for Americans in need.

This year’s Takedown Day is a significant accomplishment for the American people, and every public servant involved should be proud of their work.” 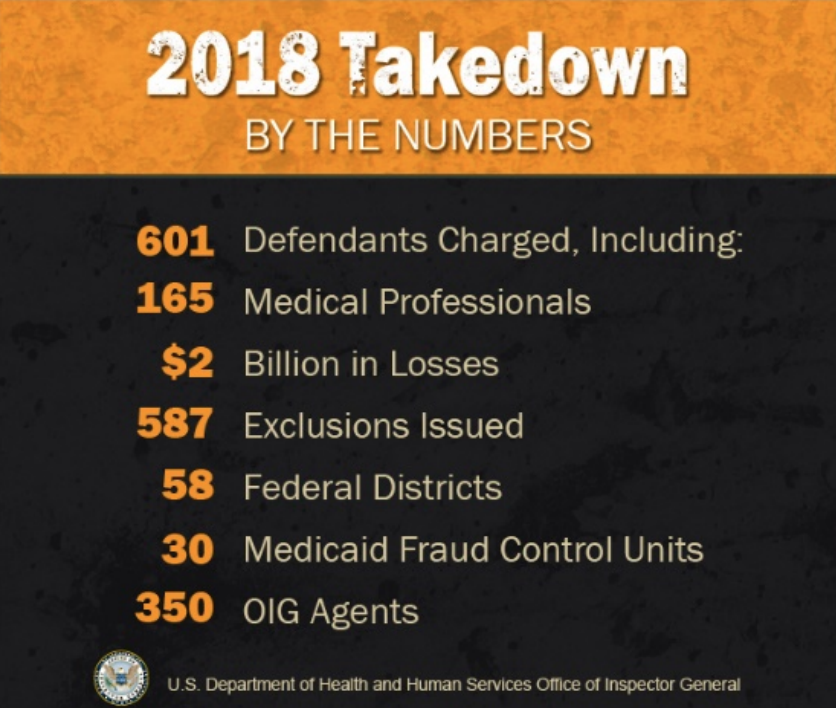 The Opioid Crisis and Overprescribing Physicians

HHS OIG continues to emphasize their pursuit in catching those parties who are contributing to the opioid epidemic, as previously discussed in detail by Daniel Levinson, Inspector General HHS OIG.

2018 Excluded Individuals and Entities from Opioid Diversion and Abuse

Since the previous health care fraud takedown, held in June 2017, OIG has issued 587 exclusion notices to individuals and entities whose conduct has contributed to opioid diversion and abuse.

These notices bar participation in, or submitting claims to, all federal health care programs, including Medicare and Medicaid. Among those issued exclusion notices were 67 doctors, 402 nurses, and 40 pharmacy services.”

To find out more about the 2018 National Healthcare Fraud Takedown, you can visit the following links below with more information.