Health Care Fraud a High Priority for the DOJ

This year’s American Bar Association’s 27th Annual Institute on Health Care Fraud featured Acting Assistant Attorney General Kenneth Blanco, of the Criminal Division of the Department of Justice (DOJ). Mr. Blanco reiterated Attorney General Jeff Sessions’ commitment to ferreting and fighting fraud and abuse. Blanco conveyed the following message, “Let me be clear, health care fraud is a priority for the Department of Justice and Attorney General Sessions feels very strongly about this. The investigation and prosecution of health care fraud will continue, the department will be vigorous in its pursuit of those who violate the law in this area.”

The Assistant to the Attorney General informed the audience that health care fraud cost taxpayers billions of dollars each year due to fraud and abuse. He went on to highlight the successful efforts of a combined federal team of DOJ, OIG, FBI, state Medicaid, local law enforcement, and Medicare Strike Forces located in nine health care epicenters in the U.S. These Strike Forces use cross-disciplinary and cross-agency sharing of data and resources to investigate and prosecute fraud. 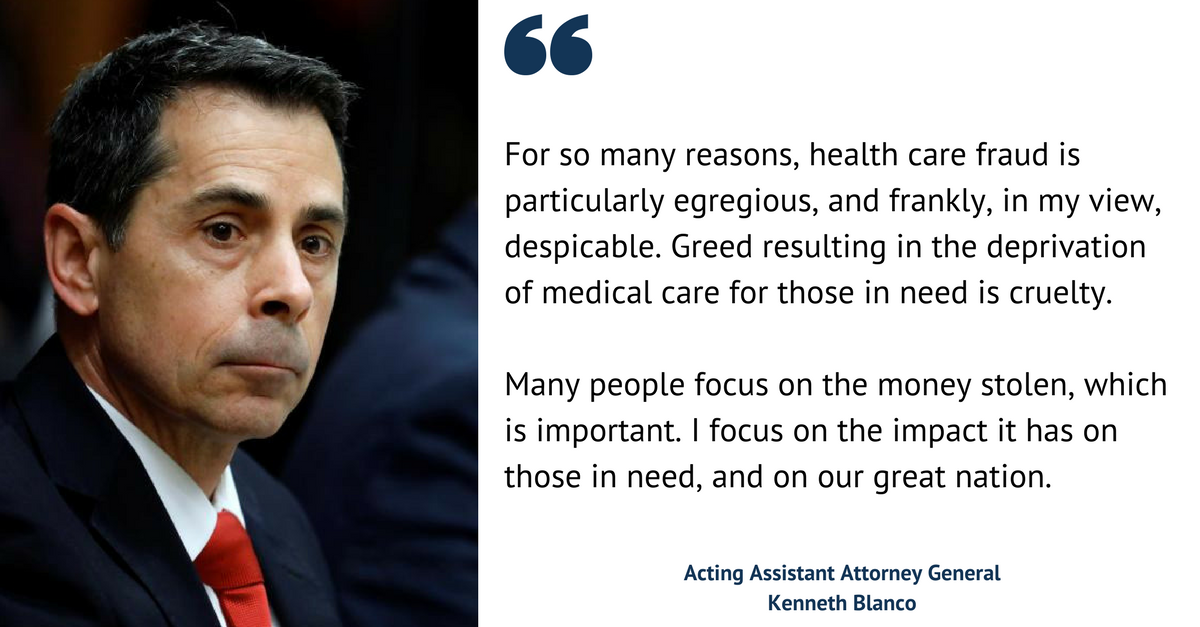 The Strike Forces have proven to be extremely successful. Since 2007, approximately 3,200 defendants have been charged, of which almost two-thirds were convicted. The total dollar amount recovered from these efforts reaches the billions. In fact, most recent ROI indicates $7:$1 retrieved for each dollar spent investigating and fighting fraud in health care.

“We now have an in-house data analytics team headed by some of the best and brightest. Analyzing billing data from CMS has become a key part of our investigations because it permits us to focus on the most aggravated cases and to identify quickly emerging schemes and new types of Medicare fraud. Access to CMS billing data in close to real time permits us to remain a step ahead. We have the opportunity to halt schemes as they develop. This cutting-edge method has truly revolutionized how we investigate and prosecute health care fraud”.

It is these coordinated efforts combined with the OIG commitment to protect the integrity of the federal health care program dollars that health care fraud and abuse is front and center in federal and state investigations and prosecutions. Coupled with the added exclusion authorities that Congress added to the OIG arsenal, fraudsters of today better look out and think twice before committing or entertaining a fraud scheme for pecuniary gain.