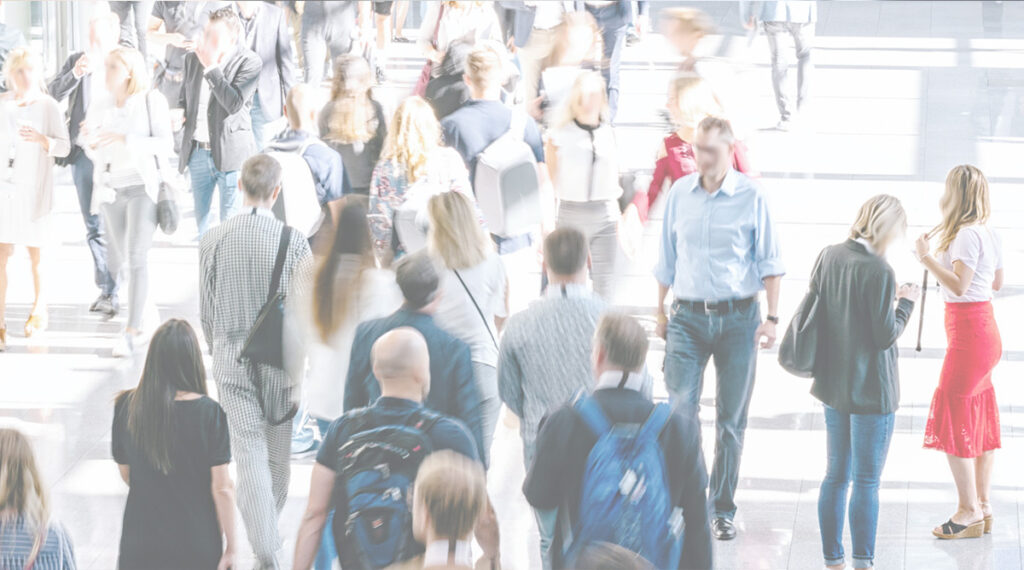 Let’s face it, screening and monitoring large healthcare populations of employees, vendors, and all of the entities in between, can be a daunting task. In fact, it can be downright scary to imagine some of the risks involved in the normal operation for healthcare providers, health systems, health plans, and the like. When it comes to finding healthcare criminals or bad actors it may seem like trying to search for “needles in the haystack”.

If you are in compliance, you might even find sleeping well at night an issue given the regulatory oversight by OIG, DOJ, and CMS. Are you billing properly? Is your staff properly trained? Is everyone currently licensed and not excluded by a federal or state exclusion agency? Did you properly screen your vendors and third-party contractors before allowing them on-site or to perform a service for your organization?

Consider that when headlines hit or the news breaks on the screen, this could be the first time a Chief Compliance Officer or Human Resource Manager gets a glimpse into a messy situation that can involve a variety of people or businesses associated with the company. The effects of this are devastating, not only for the trust of the organization but for individuals seeking help from care providers.

John Fauber and Matt Wynn in a recent USA Today article explain how providers escape license revocation in states by continually trying to outrun their disciplinary actions, and the inefficiencies in collecting this information from each state – Malpractice, mistakes and misconduct: Doctors who surrender medical license in one state still practice in others.

As technology advances, healthcare criminals and bad actors are having a harder time getting away with fraud and abuse – especially with more thorough data analysis and automated systems being utilized to proactively look for fraud. Better data systems and processes provide enhanced support for reducing or eliminating human error, judgment calls, or documentation problems.

More predictive analytics and monitoring best practices are being put in place to help catch criminals faster and we are proud to partner with many organizations to help reduce their risk when it comes to hiring, monitoring, and taking action. Let’s take a look at some real-life examples of how to use smarter monitoring tools to help keep your organization and patients safe.

A story that most of the public is familiar with is that of the former sports doctor, Larry Nassar. This monstrous story continued to evolve as more people came forward as being victimized for many years. Last week, during the ESPYs Awards, Aly Raisman and more than 140 survivors of sexual abuse accepted the Arthur Ashe Award for Courage. As these women move forward in their lives, many of us still are pondering the question of how something like this could have gone on for so long?

In the case of Larry Nassar, one must take a deeper look at some of the signs of disciplinary action and data that can be provided to tell a broader story. Before Nassar eventually became indicted in Texas, he was excluded in two other states (Arizona and Michigan) recorded on the OIG LEIE. When it comes to searching for excluded providers, we’ve found that many compliance or HR professionals believe that screening these new employees is a simple task. In theory, it should be, and given the correct information – simply searching the OIG’s website should be a pretty straightforward task.

However, as in the case of Larry Nassar, many healthcare organizations would not have caught Larry Nassar on the OIG LEIE because of a name discrepancy. We see this so many times because of either the quality of data capture or intentional fraudulent activity from healthcare providers or vendors providing names that are not reflected on national exclusion lists like the OIG LEIE or SAM.gov. You see, Larry Nassar did not show up on the list because the name associated with the exclusions was: Lawrence Nassar. When searching with these credentials, here is what you would find by searching the OIG LEIE. 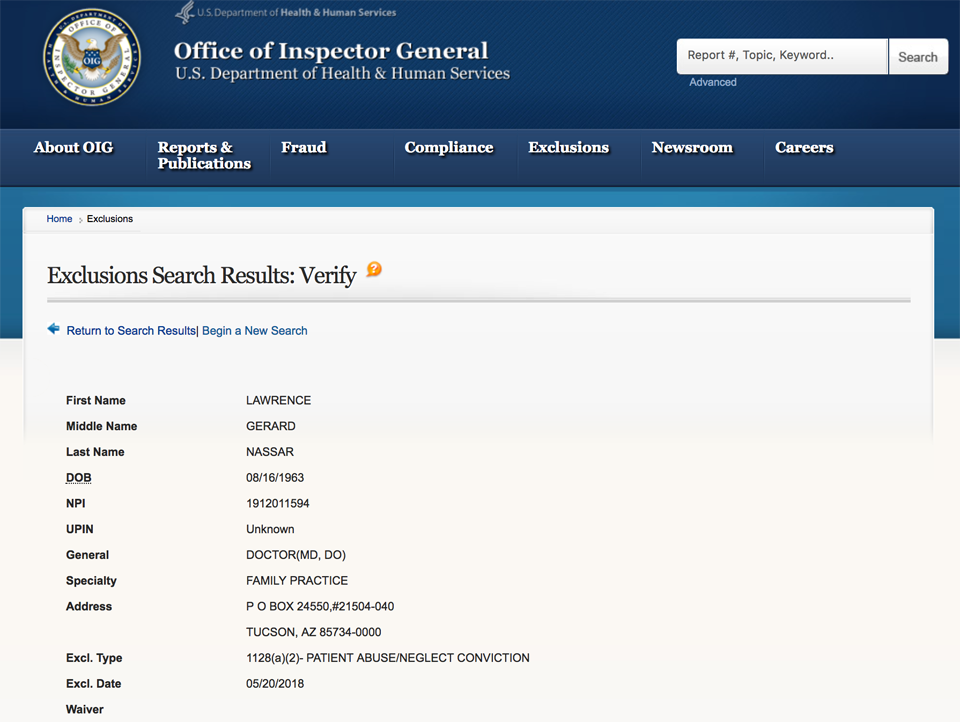 Here is a case of twin brothers who banded together to commit massive healthcare fraud to fund their lavish lifestyle.

Thurlee and Roylee Belfrey are two brothers charged with conspiracy to commit fraud by operating several home health businesses and defrauding the Medicaid fund. The brothers committed these acts over 15 years in Minnesota, including fraudulent nursing and home care services.

They even conspired with their accountant, Kenneth Frank Harycki (formerly the mayor of Stillwater, Minn.) who submitted false tax returns knowing that his client was collecting but not paying or reporting FICA taxes on their employees.

On September 14, 2017, the twin Belfreys pled guilty to fraud and tax charges. Lanore Belfrey, the wife of Thurlee also pled guilty to conspiring to evade personal taxes. According to the guilty pleas, the Belfrey twins deducted and collected money from their employees’ wages from 2007-2013, but did not pay the withheld amounts to the government.

Roylee Belfrey is not currently excluded at the OIG.

It remains to be seen whether, as a result of the recent guilty pleas, more exclusions will be added.

It has happened before, and it will happen again. An excluded individual who is prohibited from participation in federal healthcare program dollars due to fraud skirts the system by forming a new company and billing through it. This is a no-no and OIG is catching on to it.

Many times, we hear from healthcare professionals that for the most part, their exclusion process is either a manual one or that they have a simple tool that they use to perform the verification process. This could mean an internal team member is checking the OIG LEIE with employee information one by one or they’ve purchased a monthly subscription for exclusion screening. While we are most certainly advocates for doing something vs. nothing, we believe that using smarter datasets and having specialized workflows is essential in mitigating risk and better understanding your employee population from both an HR and compliance perspective.

At ProviderTrust, we pride ourselves on piecing together comprehensive datasets to create a full profile of a large population of healthcare providers and licensed employees. In this way, we are able to fill in missing information that either you are not capable of obtaining, or may not have the time and resources to devote to aggregating yourself. Our software solutions provide a broader context of information, including sanctions and disciplinary actions for individuals that they may not disclose to you until it’s too late.

When it comes to hiring and monitoring the best quality of staff for your organization or referral network, a smarter monitoring process is key to eliminating bad actors from your organization. Predictive analytics at the state and national level provide you the opportunity to catch criminals that may be hiding in your population – giving you the tools you need to find the needles in the haystack.

For more information on exclusion monitoring and automating your workflows, visit our site at providertrust.com or give us a call to discover more at (615) 938-7878!