OIG Exclusion List Monitoring: What You Need to Know 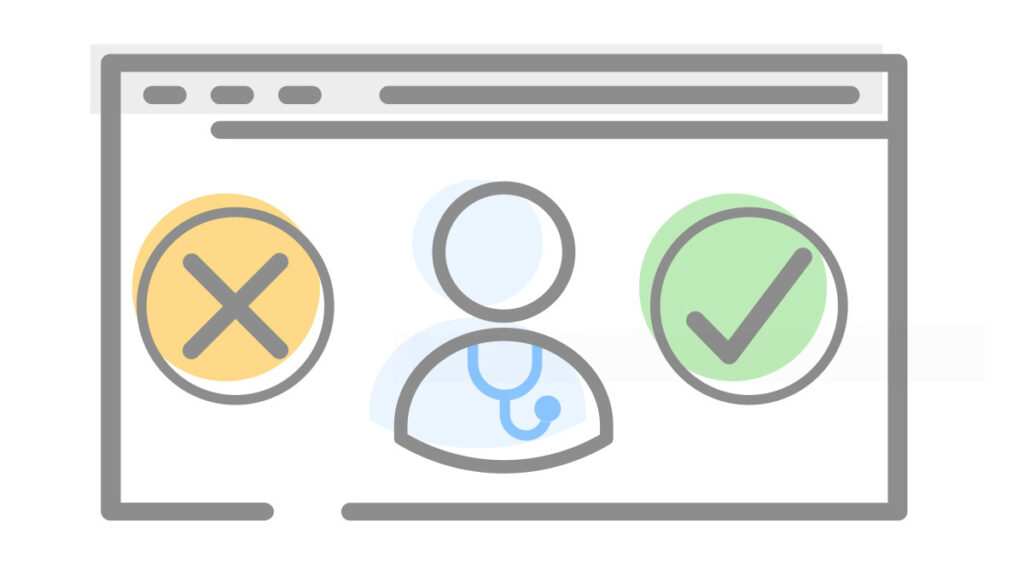 OIG exclusion list monitoring is a critical tool for ensuring compliance, program integrity, and patient safety. Since it’s also a CMS condition of participation, healthcare organizations can’t afford not to monitor their employed and contracted populations for OIG exclusions.

If you’re looking for an introduction or refresher of the HHS Office of Inspector General (OIG) Exclusion Program and the process of screening your population for exclusions, you’ve come to the right place. In this post, we explain the basics of OIG exclusions and exclusion list monitoring.

Exclusions can be levied by HHS OIG, a state agency or Medicaid Fraud Control Unit (MFCU), or by one of the many agencies associated with SAM.gov. Regardless of the authority that levies the exclusion, the excluded party is subject to the same prohibitions.

Here’s a little more insight into each of those authorities.

The HHS Office of the Inspector General (OIG) Exclusion Program serves to protect federal healthcare programs by limiting the impact of fraudulent and bad actors. Since federal tax dollars are used to reimburse healthcare providers for services, the Department of Health and Human Services (HHS), the Center for Medicare and Medicaid Services (CMS), as well as the Department of Justice (DOJ), have oversight on how those dollars are spent. 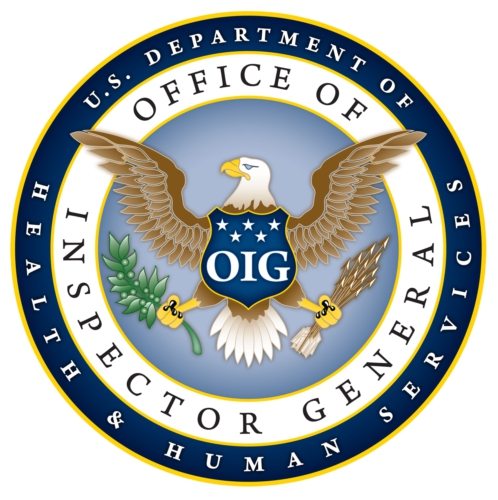 One of the actions HHS OIG can take against an individual (like a doctor or nurse) or entity (such as  a provider or vendor) who has been convicted of a certain crime is to exclude them from receiving federal tax dollars, specifically from Medicare and Medicaid. This is called an OIG exclusion.

Each state has a department or agency dedicated to upholding the integrity of Medicaid programs and public health. Though each state enforcement authority can vary by name and functions, (Department of Medicaid, State OIG, Department of Health Care Services) each one outlines the rules of ineligibility for licensed providers who have been disciplined or lost certain license privileges. Many states maintain and publish their own exclusion list, all of which should be included in your monthly screening process. See our interactive Exclusions List Map to find information about a particular state.

Download the Guide to Healthcare Exclusion Authorities to Learn More.

While many exclusions are the result of fraudulent or abusive behavior, others are levied due to administrative actions. Regardless of the type or reason, the excluded party is barred from directly or indirectly receiving government healthcare dollars until reinstated.

There are two types of exclusions, mandatory and permissive, depending on the severity of the excluded party’s actions. Mandatory exclusions carry a longer required duration. The reasons for exclusions are described in the Social Security Act 1128.

To receive a mandatory exclusion, an individual or entity must have received a felony conviction for:

The mandatory exclusion can last from five years up to 50 years—and in certain cases, can be permanent if the felony warrants it.

When the exclusion period is over for either a mandatory or permissive exclusion, the individual or entity must apply for reinstatement at the federal and state level. Reinstatement is not automatic after the duration has expired. 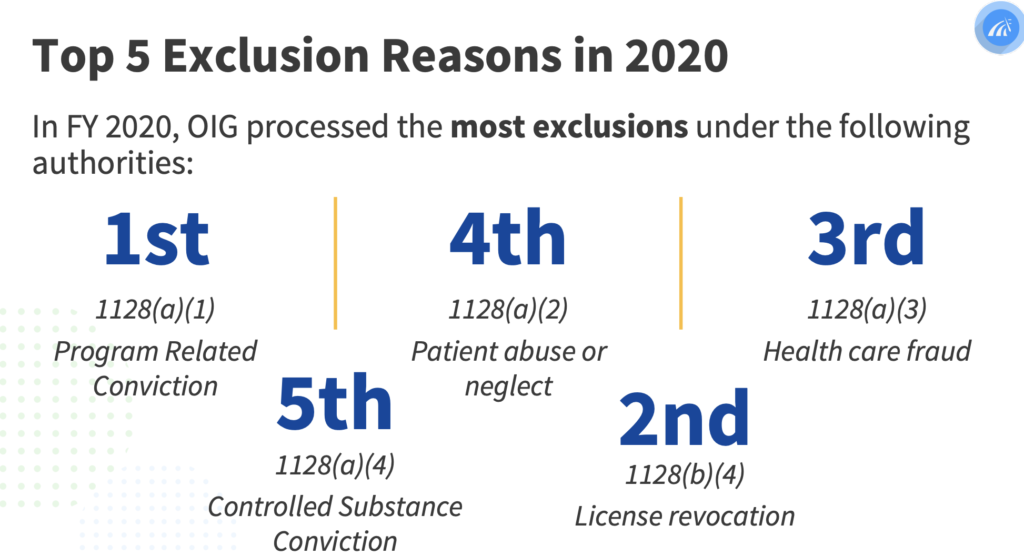 Exclusions are not just published in one source. They span dozens of on and offline sources across the country. Each source has its own unique way of doing things, which makes monitoring all of them a great big puzzle.

After the OIG sanctions these individuals and entities, they put them on a list called the List of Excluded Individuals/Entities (LEIE).

Healthcare organizations must then vet their current employees and people they’re considering hiring by checking the list to ensure  that vendors and others they may work with or buy from haven’t been excluded and placed on the list.

This process happens through the (OIG) Exclusion Program which sets forth expectations and guidelines for healthcare organizations to follow. At first glance, these mandates seem straightforward and simple enough to implement:

The OIG relies on healthcare organizations to carry out this important work and to ensure there are consequences for the parties who have committed these crimes.

If an individual or entity is on SAM.gov, a healthcare company should not be in contractual privity with such person or company as it would be conducting business with a sanctioned, debarred, or excluded party. HHS OIG and CMS have both made it clear that federal program payment for (1) items or services furnished by excluded individuals or entities, and (2) salaries, expenses, or fringe benefits of excluded individuals (regardless of whether they provide direct patient care) are prohibited. SAM.gov datasets should be included in all exclusion screening processes for employed and contracted populations. Learn more about the OIG LEIE vs. SAM.gov.

State Medicaid exclusion sources are varied and present significant challenges to manual screening processes. They publish exclusion records in different formats and with varying amounts of data, making it difficult and resource-intensive to identify a match within your population.

Learn more about Why Your Low-Cost Exclusion Monitoring is Costing More than You Think.

Why is it important to check every available state exclusion source? Because if an individual or entity is excluded in one state, they’re excluded in every state. And because 50% of all state Medicaid exclusions never show up on the OIG LEIE. 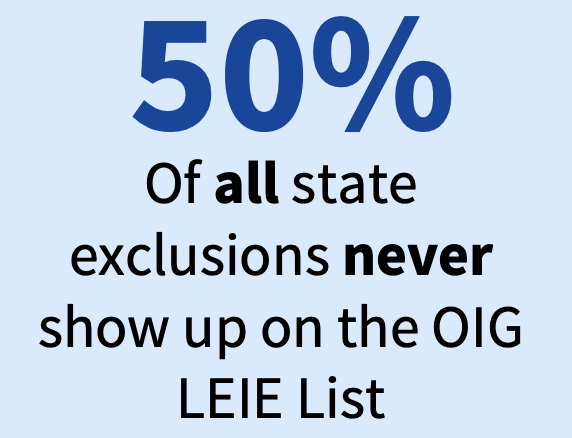 The financial cost of paying excluded parties is significant. In 2020, the average penalty for an exclusion violation was $101,000.

Here is what healthcare organizations face if they engage with and reimburse a party that’s on the OIG LEIE: 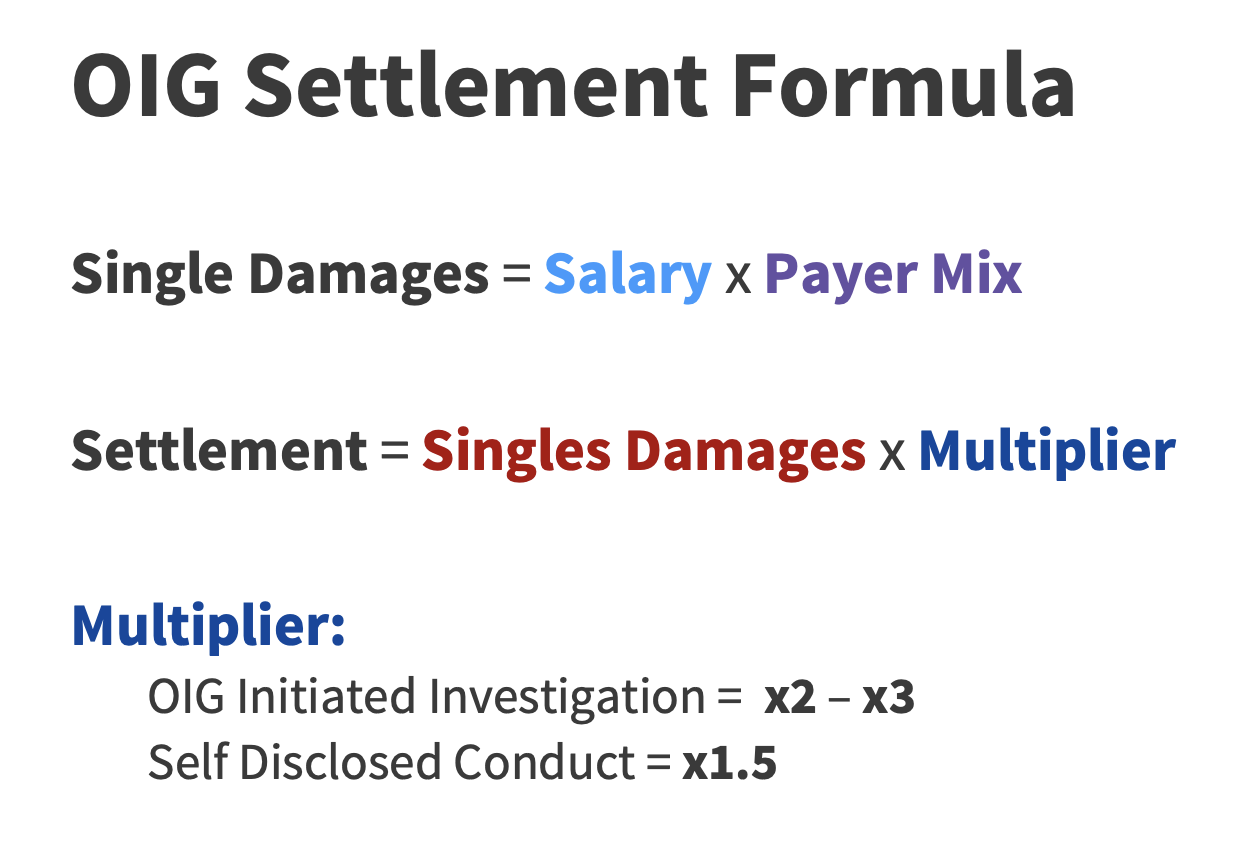 Exclusion Monitoring: How and When

CMS requires healthcare organizations to conduct monthly exclusion monitoring of all employees, contractors, vendors, and ordering and referring providers. But given the irregularity of primary source updates, an ongoing exclusion program is best practice. If you have an excluded provider in your organization, you need to know as soon as possible.

To find all the current exclusion sources, you can use our interactive exclusion map.

Given how tedious and time-consuming exclusion monitoring can become, most healthcare organizations choose to partner with a vendor like ProviderTrust who specializes in this monitoring and can provide a more efficient experience. But be aware: not all exclusion monitoring vendors successfully overcome the many challenges involved.

Manually checking all available exclusion sources each month requires an incredible amount of work! We do not recommend an organization of any size attempt to do this—it’s simply not worth your time. Here’s why:

Don’t trust your organization’s compliance to anyone but the best. Unlike most vendors, ProviderTrust doesn’t rely only on sparse publicly available data. We combine powerful data enrichment and the industry’s best matching algorithms to deliver your team superior results with the most efficiency.

How confident are we that we’ll catch every exclusion within your population? We back up our work with a $10M E&O policy. Learn more about just how good our exclusion detection is.

Ready for a customized product tour?